A reflection from Fabiano Schivardi, Luiss Deputy Rector for Research and Tom Schmitz, Bocconi Professor of Economics, on the relationship between IT and productivity

Figure 1: Productivity growth and IT capital across the OECD 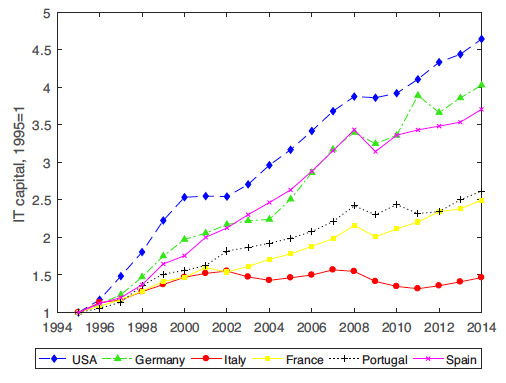 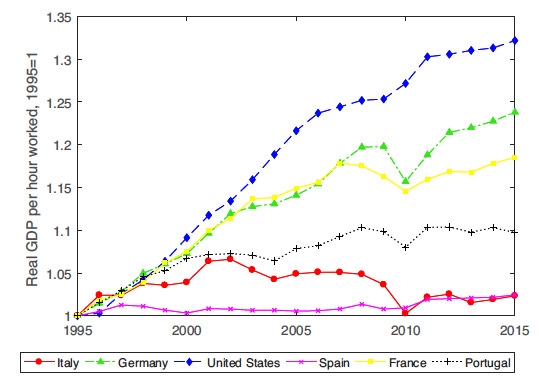 B: Growth in the real IT capital stock

These trends represent a challenge for the survival of the monetary union. While a common currency can function well with geographical differences in productivity levels, it is much harder to accommodate persistent differences in productivity growth, particularly when inflation is low.  A line of research claim that inefficient management practices have kept Southern European firms from taking full advantage of the IT revolution (Bloom et al., 2012; Pellegrino and Zingales, 2017). In a recent paper (Schivardi and Schmitz, 2019), we investigate this argument in greater detail. In particular, we seek to identify its main mechanisms, to determine their quantitative importance, and to discuss some policy implications.

We note that the striking divergence of Southern Europe coincides with the diffusion of information technology (IT) in the mid-1990s, which was a major driver of productivity growth in the leading economies. In Southern Europe, this IT revolution made relatively little headway. Panel B of Figure 1 indicates that between 1995 and 2014, the real stock of IT capital increased by a factor of 4.6 in the United States and by a factor of 4 in Germany, but only by a factor of 1.5 in Italy, 2.6 in Portugal and 3.7 in Spain. Thus, IT diffusion in Southern Europe was limited, and even in countries that had somewhat faster growth in IT capital (such as Spain), IT had a negligible impact on productivity. Why was this the case?

An extensive empirical literature documents that IT adoption requires changes in firm organization and that it induces higher productivity gains in better-managed firms, because management practices and IT are complements. However, Southern European firms perform systematically worse in terms of management efficiency. Figure 2 illustrates this by using data from the World Management Survey (WMS), developed by Nick Bloom, Raffaella Sadun and John Van Reenen. The WMS is an innovative survey that allows to score firms in terms of the quality of their managerial practices. It has been applied to more that 20.000 firm in 35 countries. Figure 2 plots country (standardized) averages of this measure for industrialized economies, showing that Southern European countries such as Italy, Spain, Portugal and Greece have substantially lower scores than Northern European countries, the United States, Canada and Japan.