Promoting exchange and cooperation between the Chinese and Italian markets 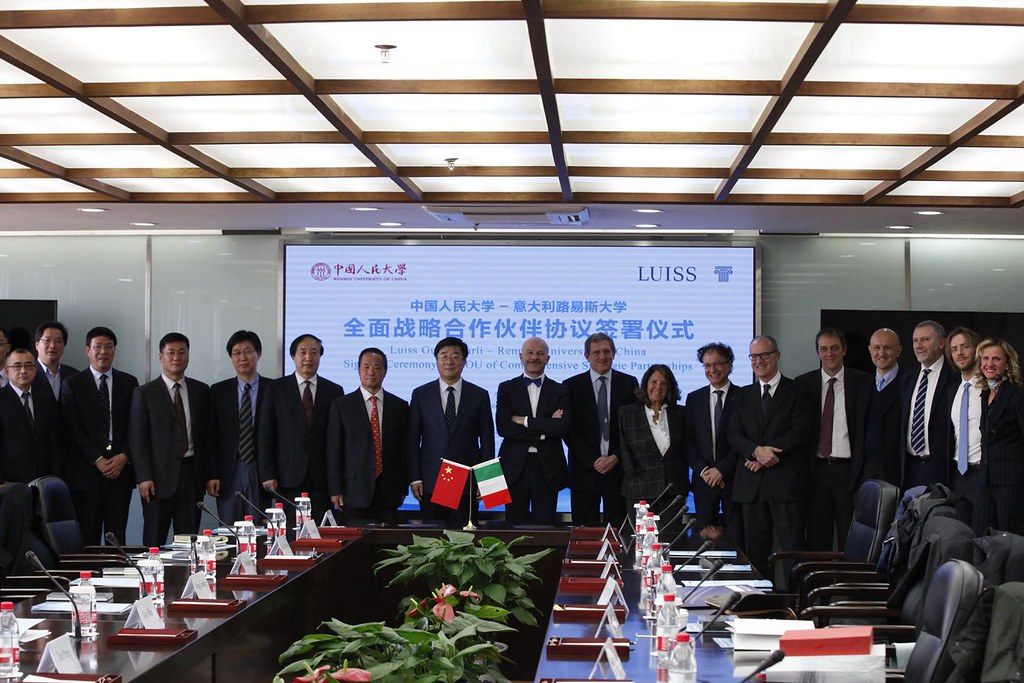 Promoting exchange and cooperation between the Chinese market and Italy’s entrepreneurial, professional and institutional communities, creating new paths in the Silk Road of education. This is the objective of the Comprehensive Strategic Partnerships(CSP), the new and important agreement that Luiss University signed with the prestigious Renmin University of China(RUC) in Beijing on Friday, March 29.

A Double Degree for the Master's program in Global Management and Politics, a close collaboration on Luiss Summer University courses, the establishment of a Chinese Library within the University under the patronage of the State Council Information Office of the People's Republic of China and RUC. These are the pillars of the agreement, encouraging dialogue, increasing integration and strengthening the cultural networks of the two Universities.

The five-year partnership was signed on Friday, March 29 on the RUC campus in Beijing before President of Renmin, Professor LiuWei, who welcomed members of Luiss Leadership: Executive Vice President Luigi Serra, Vice President Paola Severino, Rector AndreaPrencipe, General Manager Giovanni Lo Storto. Also present at the ceremony was the Undersecretary of State of the Italian Ministry of Economic Development Michele Geraci, who said in his introduction: "I am very proud of this agreement signed by two prestigious universities such as Luiss University and Renmin University, that have a common vision, a strong identity on social sciences fields and a high development potential."

"The partnership with RUC strengthens the University's internationalization process in China that, since 2006, has allowed 500 Italian and Chinese students to experience higher education in both countries,” declared Luiss Rector Andrea Prencipe. He added: "Luiss is educating a generation of cosmopolitan professionals who are conscious of their roots but flexible and openminded, who can interact with different cultures and worlds. Now, more than ever, it is essential to be able to think and act without limits."

On the behalf of Renmin University of China, PresidentLiu Weipointed out that: "The Comprehensive Strategic Partnership Agreement with Luiss University is not only an important event for the two universities to inject a strong impetus into the exchange of higher education between China and Italy, but also a concrete embodiment of promoting the culture of our countries and a significant step toward a long journey together."

Luiss University Executive Vice President Luigi Serra, speaking during a Working Meeting with representatives of the Departments of RUC, underlined the great opportunity that this agreement offers to future generations of students and professionals, increasing dialogue and cooperation, building a bridge between two cultures.

The theme of academic, economic and legal collaboration is at the center of the debate on Digital Infrastructures and Business, hosted by Renmin University, during which Luiss Vice President Paola Severino gave a keynote speech entitled Cybersecurity and Business in International Law.

"Today was an important occasion to reflect on the protection of our companies in the era of the Internet Economy that has caused profound changes in the competitive logic of markets and has exposed them to increasing cyber threats," declared Professor Severino. She adds: "The cooperation between countries, as well as between universities and research centers, is fundamental in the growth and development of the global economy with increasing guarantees of national and transnational security against digital crime."

Between institutional meetings for the heads of Luiss University and Renmin, dialogues were also held at the Istituto Italiano di Cultura, where Luiss graduates and Italian exchange students in China were treated to a concert of classic Italian and traditional Chinese music to celebrate the two countries' cultures.

After a warm welcome from Institute Director Franco Amadei, Luiss University Executive Vice President Luigi Serra underlined: "Learning about others, even through music, is important for our students. Listening to these talented young people was a great opportunity of exchange and enrichment for both countries."

With the Comprehensive Strategic Partnership, Luiss creates new paths along the Silk Road of Education. Since 2006, when Luiss University established its double degree program with Fudan University in Shanghai, the University has expanded its presence to 11 Chinese cities through 13 cooperation agreements with top-ranked educational institutes such as Hong Kong Baptist University, the University of Macaoand Beijing Normal University. The University furthermore offers 20 scholarships to Chinese high school students that want to study in Italy through numerous agreements with high schools in Beijing, Shanghai, Tianjin, Qingdaoand Chongqing.

Not only limited to academics, sport plays a key part of the University's mission in China. On Saturday, March 30, the Luiss basketball team, leads by coach Andrea Paccariè, played a friendly game against the RUC women's team. There was also time for tennis, a very popular sport in China, allowing Luiss tennis players LucaTurchetti and Gaia Marullo to play both doubles and single matches.

Also participating in the celebrations were numerous alumni and members of the Luiss Alumni Association (ALL) who work in China and who, last year, established the first ALL chapter in China, leads by Ludovica Murazzani, Consul at the Italian Consulate General in Shanghai.